Islands can be volcanic and coral origin. Usually there are two types, islands on the atoll which are flat up to a few meters above sea level, they are actually at sea level. But isolated islands that are flat, have their own reef, and coral sand deposits that accumulate over time, and grow the same as islands on the atoll, around sea level. They are usually round, ovoid or elongated. Then they create vegetation on them, and they are the same as the islands on the atoll, except that they are often separate (so-called Maldives island style, flat with drizzly-white sand on the beach, drizzly-blue water, coconut palms and shrubs)

(Fangasito Island in Tonga and Motu Matatahi in Rangiroa Atoll, French Polynesia. We see that they are both similar, flat, surrounded by beaches and shallow water and have similar vegetation)

There is one thing here: the islands are at sea level, surrounded by salt water, so their sandy substrate is also salty, and winds that regularly blow and storms often bring salt and salt water, so it is a type of growing vegetation very limited. Only plants that can withstand salt water need to grow. And there are a few. Some trees and shrubs. Among them is the famous coconut palm tree. That is why there are always coconut palms in these islands.

Another type of islands are islands with hills. They are also of coral or volcanic origin. They also vary in size and height, and the height of the hill. They also have a beach, shallow water, surrounded by a ridge, a plain around the beach, but also a hill that can be as high as 300 meters or more (Robinson Crusoe Islands)! Unlike the flat islands, the hill gives them other options, to have a view from above from a height, to walk uphill. But the important thing is that because of some altitude and distance from seawater, other vegetation grows on the hills, smaller jungles can form. Coconut palms and the same vegetation as the flat islands usually grow down on the beach and plain. Some islands even have sources of drinking water of good volcanic origin. Some may have an ingrown crater, or even a saltwater crater, along the coast or toward the center. 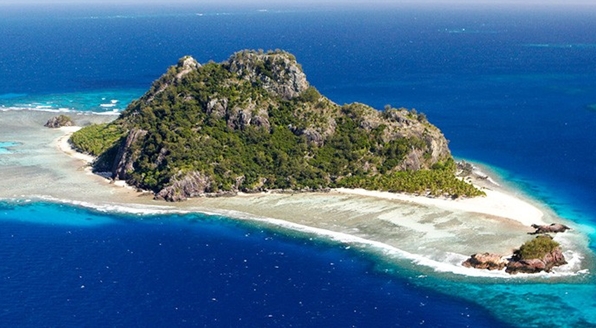 Example of famous Monuriki Island in Fiji. We see that it has some hills, rocky ones with bushes and shrubs in many parts. In flat part near the lagoon, we see a traditional scene with coconut palms and white sand beach continues. 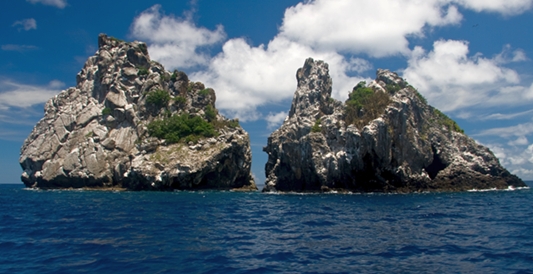 There are also bare, rocky islands where only shrubs grow. Here we see example, located near Ronde Island in Grenada.