As one of the most famous islands in Queensland, Great Keppel Island is not without issues as well. Here we have an example of potential risk and treat for the environment, and this is just one of many examples, not just in Australia itself, but worldwide, how nature is sacrificed for money gain and great business.

Back then many of newsreports (like this one here https://www.couriermail.com.au/news/queensland/great-keppel-island-in-for-600-million-makeover/news-story/4ee230955de80824c5a8f63465a98b05  ) reported in 2013. and 2014. that 600 million dollars resort project has been approved by govermnent on Great Keppel Island! That is huge!

In 2018. it has been sold to Singaporean/Taiwanese group based in Singapore for around 50-70 million $. It is marked the largest island sale in Australia in 15 years since Hamilton Island. Then, last year, it has been reported that transaction for sale is still stuck. Troubles in paradise, maybe?

Anyway, we should check ,,Master Plan” for Great Keppel island. And yes, that is not joke, this is serious actually:

You can even see promotional video of this

It already has hotels and resorts and many other buildings, and instead of fixing/upgrading those, they plan to make 700 villas + 300 apartments+giant hotel with 250 rooms+casino+huge marina+restaurants, pools and shops! It all under mask of ,,eco project”. This will clean many areas of island, this is overdeveloping under government’s approval! In island which is part of national park!

,,“The development is fully supported from all levels of Australian government, federal, state and local, and has approval for the immediate development of an 18-hole international golf course. Also approved are 750 luxury villas … 300 luxury apartments and a five-star beachfront resort with 250 rooms and a 250-berth marina.”

So, shortly, what is issue here. Here I will try to explain in simple manner in example so everyone can understand it easy:

Let’s just say that we have Island A and Island B. They are both similar size, and located one to the other. Island A has 5 houses, and Island B has 1000 houses. For the sake of this example, let’s just say that each house has one plastic chair. Soon, heavy storm arrives, with winds strong about a 250km / hour, lasting for a few days (it already happened, cyclone Debbie, Yasi, Nathan…). In island A, it will destroy/heavy damage all 5 houses, and all plastic chairs there will scatter around, 5 chairs! But in an island B same storm will destroy/heavy damage all 1000 houses! That is 1000 chairs scattered around the island, on beaches, in water, everywhere!

Why? Because they build 1000 houses, that is why. And storm happened as it occasionally happens! Everyone here ignored this fact and decided to build for the sake of money, personal gain, at the cost of nature! Remember that we use as an example, one car per house. Here, in question we have over 1000+ luxury houses, villas, hotels. Those all have much stuff for living and spending time there, I do not even need to mention what happens when raging storm blasts everything up there, scattering various plastics, fuels and many other materials around! And huge marina with boats, there is risk of coral damaging and oil spitting from boats. And too many people in those buildings in one place make one wonder how the island can take it. And this is not science fiction, it happened a few times in Queensland islands already, that much that islands are even today abandoned and resorts in ruins!

But wait! They have right to build! They are company! – Yes, but explain this to the raging storm! Explain this to Debbie, Yasi, Nathan and other storms, to wildfires and all catastrophes happened until recently! Next time such storm happens, we should let CEOs, layers, politicians, super rich people stand in front of the storm and explain to it that they have rights, constitution and need to overdevelop islands! Maybe storm has eyes, brain, understanding, so it will listen and avoid island, and go only to islands where people do not claim human rights!

But I bet to a different result. Storm will blow them away with all their infrastructure. It is not human, or animal, you can’t convince it, it won’t adapt to them, they need to adapt to it and nature. Speak what you wish, bring laws you wish, believe in whatever you wish. The fact is that it will ravage everything! You build 5 houses, 5 will be blown, build 1000, all will be blown.

Or, we will see more articles such this https://www.themorningbulletin.com.au/news/as-great-keppel-island-hideaway-owner-sean-appleto/2160569/ 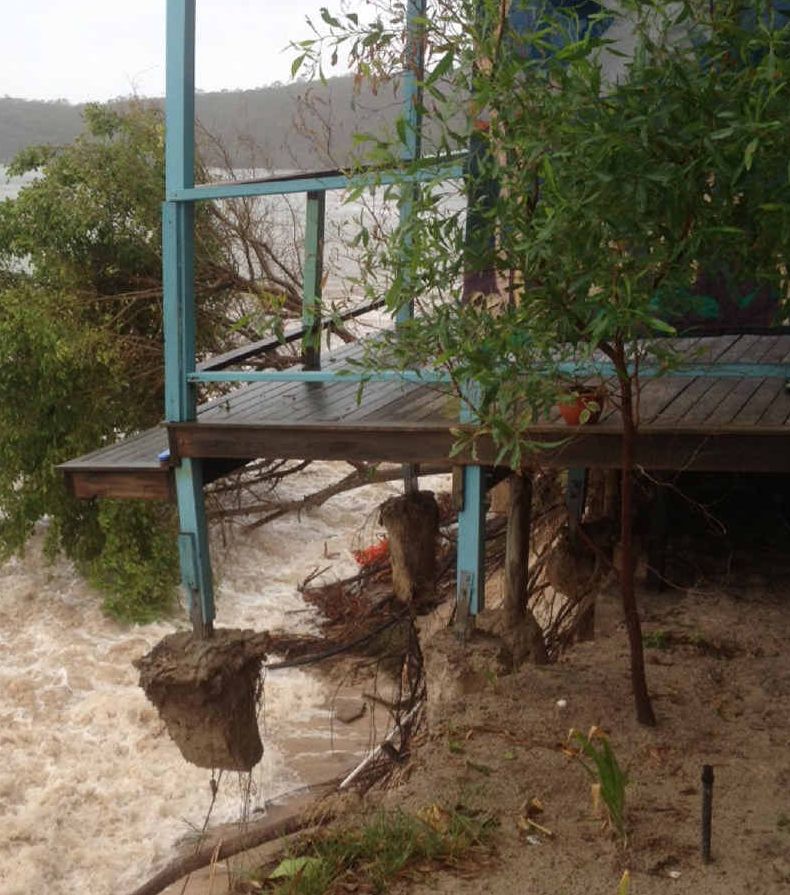 Oh look, what a coincidence! It was Great Keppel damage! Now, I am not saying that we should not build in the islands. People should and must build to live. But there is one thing when the storm hits neighborhood where people live and completely another thing when it hits the block of buildings made for corporate needs and business! I am not saying anything what I wish, but what I conclude from storms. It said much, that is why those areas are in problems. But corporations do not care! They build whatever they wish in the islands, exploit them for business, and when a catastrophe happens, they remain in their own cities far from the islands they posses, and after storm leaves, we see the ruins! And pollution everywhere. Nature recovers after storm to some extent, but concrete leftovers and plastic and whatever else can just pollute surroundings, and prevent nature to regenerate on those places in the same rate as it would without them.

Now, fair play in this case, as those all infrastructure will mean that many people will get jobs, first in construction area. After it is completed, food, tourism and other sectors will be slightly better in this region, even flights from Sydney to the island will be made. And this is all nice before another catastrophe happens! Then, again, and again, we will see scenes of ruins and trash everywhere…

There are many people around whose bought the islands, but do not plan to build many of them. They bought for the sake of enjoyment and mind calming. They protect the islands. But there are corporations and super rich individuals which buy islands only for the sake of huge development and business. They simply cannot resist and cannot stop. They should not have right to do this to the islands! And those master plans are just one of many examples of what is happening worldwide!